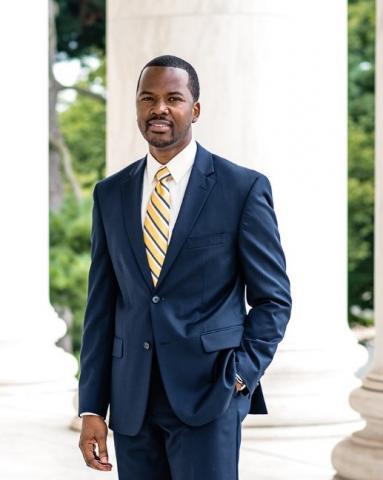 Policing in schools is a hotly debated topic that is often divided across political lines. Dr. Kenneth Alonzo Anderson, associate dean, noted that high profile cases such as school shootings or viral videos of excessive force committed by officers often inform the thinking behind why individuals and groups resist or advocate for policing in schools.

However, Anderson’s research showed that there is much to be learned about policing and schools, especially regarding day-to-day safety issues that do not receive as much attention as high-profile incidents. Although there are very strong opinions about policing in schools, Anderson asserts that there is not very much research that has been conducted on this issue. Many rely almost solely on their beliefs, past experiences, and historical knowledge.

Anderson argues that policymakers, parent groups, and other decision makers should also use credible research to inform their positions as well. He lamented that, “Legislators are quick to use news outlets and social campaigns to highlight new school safety policies that have been introduced. Yet, evaluation and communication plans that describe outcomes of school safety policies are not pursued with the same vigor, if at all.”

In a recent study, Anderson conducted a rigorous, 7-year independent evaluation of North Carolina’s Senate Bill 402, Section 8.36, passed by the General Assembly of North Carolina, a grant program that provided selected school districts with $2 for every $1 spent to hire or train SROs in elementary and middle schools.

When evaluating the 16 disciplinary acts that must be reported to the state, Anderson found no relationships between improved school safety outcomes in the middle grades and receiving additional grant funds for SROs. He did, however, find that safety outcomes improved as achievement improved or enrollment decreased. These results do not suggest that SROs are completely ineffective; however, the results indicate that there was very little progress on key indicators after the grants were put in place. Yet, in bipartisan fashion, more monies were allocated to the SRO grant program in 2018-19.

Anderson believes that we need a different approach when it comes to school safety. He notes that “if SROs are used in schools, then communities must come together to define what success looks like.” He also noted that we are almost “hard wired” to update school safety policies when high profile events occur, but we almost never study the success stories. There are scores of schools with extremely low disciplinary rates and Anderson encourages researchers and practitioners to examine the practices and cultures of the schools these schools as well.

Anderson contends that we have a lot to learn about school climate, culture, and safety. He notes that school safety is much larger than gun violence. Safety should be viewed on a continuum that includes a range of strategies and addresses issues such as physical and psychological safety. Read more about additional lessons learned from Anderson’s school safety research.