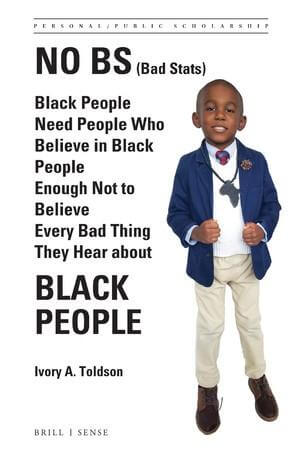 Having served in roles such as Executive Director of the White House Initiative on HBCUs with the Obama Administration, CEO of Quality Education for Minorities (QEM), and Editor-In-Chief of the Journal of Negro Education, Dr. Ivory Toldson is well-known for his national contributions to education and his knack for “shaking up the status quo.” In this interview, Dr. Toldson shares some of his insights, lessons learned, and motivation to excel within and outside of the University.

Q - You recently published a book entitled “No BS (Bad Stats)” Black People Need People Who Believe in Black People Enough Not to Believe Every Bad Thing They Hear about Black People. What was your motivation for writing this book?

A – My motivation for this book really came from doing education research and finding solutions that I thought that were really compelling…when others did not see these solutions in the same ways. My motivation also came from talking with people who had lost hope. Their lost hope was often rooted in negative statistics such as there are more Black males in prison than college, more that 50% of boys drop out of school, and exaggerated levels of criminality among Blacks. The more that I studied these statistics, I often found that many of these negative statistics were often incorrect, poorly contextualized, or incomplete. It really seemed like many who published these statistics were really attempting to sell problems rather than find solutions.

Q - What were some key lessons learned in your role as Director of The White House Initiative on HBCUs that you would like to share with the University community?

A – Well…I learned a lot in my role as Director. I learned the value of HBCUs…I learned that you can’t fully understand HBCUs by only looking at traditional standards of success. Many of the success stories are often qualitative and are not easily counted. While attending HBCUs students often realize dreams that they never had when growing up. I also learned that the federal government is an important funder…but it also made me appreciate the role of advocates and advocacy organizations who work to ensure that HBCUs continue to receive support from the federal government.

Q - Over the past several years, you have hosted a very successful session, known as “un-AERA” at the American Educational Research Association’s annual meeting, which is one the largest convenings of education professors in the Americas. What prompted you to start this session?

A – This session really came from the feeling that pure objective research on Black issues was inadequate to get to the heart of the issues. Also, when hearing prominent scholars talk candidly about their research, I found these conversations to be very meaningful. I also realized that there are not very many venues for scholars to talk candidly about their research…so, I thought there was value in hearing from prominent scholars without a scripted format. Un-AERA allows scholars to incorporate emotional experiences and passion about problems facing Black people.

Q - What are some of the larger outcomes that you hope to achieve with un-AERA?

A – I want people who were interested in doing research about Black people to have many different methods to deliver their messages. If we only emulate scholars who don’t look like us, we certainly won’t achieve solutions that we desire. I want Black scholars to be bolder and more audacious in their approaches. I want them to understand the role of empathy and compassion. Many Black scholars have been educated to use a strict scientific approach to conduct their research. A scientific approach is just one approach…I want Black scholars to claim authority over their expertise and remove shackles that have been placed on them.

Q - What are some tips that you could offer to encourage faculty to succeed based on traditional University success indicators such as publishing peer-reviewed journal articles, while also conducting translational research that reaches broader audiences.

A – I would say never lose sight of the big picture. Don’t write just to publish in a peer-reviewed journal. A peer-reviewed outlet is one way to achieve your purpose, but there are others. I think that authors should write to achieve their goals and choose outlets that allow them to achieve those goals. When you have a noble purpose for your research, don’t limit yourself. Use the most innovative and creative ways to ensure that your research makes the biggest impact.